Children all over the world know him and love him: In Germany, he is called Nikolaus. In France, he's Pere Noel. British children call him Father Christmas. And of course, you know him as Santa Claus.

Children tell lots of fun stories about Santa Claus, Pere Noel, or Nikolaus. All of these stories remind us of how much we're loved and of how happy we are when we give. The earliest stories we know were told about Nikolaus, the bishop of Myra.

Hundreds of years ago, Nikolaus lived in Myra, which is in the country we now call Turkey. Ever since he was a small child, Nikolaus studied hard and helped the poor. The story goes that Nikolaus shared all this wealth with the people of his city. He would throw gold through windows to help the poor, and still remain anonymous and humble.

Stories about Nikolaus spread from his home in Turkey to Russia, where he is still a very popular saint. Through the centuries, people passed along the stories of him across Europe, to Germany, France, and England, and eventually to the United States. The children in every country gave Nikolaus a name in their own language.

In Germany, Nikolaus Day or Sankt Nikolaustag is celebrated on December 6th. We encourage you to try a new, German tradition in your home this winter - here's how:

On the eve of December 5th, have your children place a shoe or boot outside your door. Nikolaus comes in the night and leaves little treats behind for those with good behavior and sticks behind for those who need to work on their behavior before Christmas comes.

Some of our favorite treats are: little mandarin oranges, parent-approved candy, a small book, stickers, crafting supplies, or trail mix. Feel free to customize this tradition to fit your family! 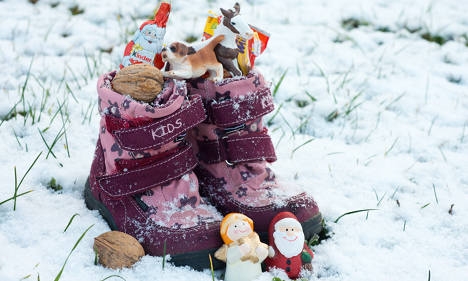